A Dying Copal Tree and Rosewood Seedlings at Jenaro Herrera

After a few days to catch my breath in Iquitos, I left with Angel on the Thursday afternoon lancha Las Ninfas for Jenaro Herrera. We had a good long talk about our research and families in Spanish and then spent an hour practicing English. Angel had been studying English in an evening class for almost two years now and making good progress. I was able to help the most by explaining the meaning of some obtuse expressions and creating a two paragraph summary about our copal research he could use to explain our work to others.

We got a small pack of buffalo cheese from one of the Garcia boys and bread from the market and loaded our bags in a motorcar to go to the research center field station. This field station operated by the Institute for Investigations of the Peruvian Amazon (IIAP) was less than two miles away, but after months of hard rain, the driver had to weave and gun his motor around deep ruts and puddles. When the rear wheels got stuck in thick mud, Angel and I jumped out and pushed the cab until it lurched free.

Our regular field-assistant Italo joined us at the station an hour later to head into the forest. Our first stop was the copal plantation where we’d been studying the ecology of resin and insects for six years. I liked our latest model of trap designed to capture adult weevils emerging from resin lumps. Italo was excited to show me an orchid bee nest he had found buried under thin leaf litter only five feet away from a tree where he’d seen the iridescent green bee collecting fresh resin. We picked it up because it had several exit holes and seemed abandoned. Angel later found the fragile remnants of three adults that had not made it out. 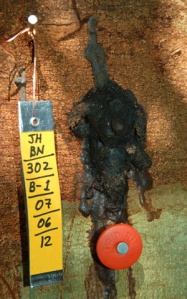 The goal of this outing was to collect enough resin lumps from the main species of copal trees at Jenaro to distill samples of their essential oils. Italo told us he had found about forty trees with lumps in the “bosque norte” (a section of primary forest in the reserve) that were not included in the group we were already monitoring on a regular basis. The first tree had one fresh lump with little protrusions formed by the weevil larva pushing up though the soft resin to breathe. The second one was a rounded black lump. We put a numbered tag next to it to identify which tree it came from and a round plastic roofing nail on the other side to serve as a scale in the digital photo Angel took of it before it was harvested. He would later use the ImageJ program to measure the lump’s area for comparison to its weight. We could then use this relationship to estimate the weight growth of other lumps throughout the development of weevil larvae inside them.

It was always interesting to see the different shapes and sizes of resin lumps made by weevils, but so far we hadn’t seen any large ones that we had asked Italo to find to make our harvesting for distillation more efficient. Although he had spent three days scouting, he finally told us he had only found one tree with a large amount of resin on it. We clearly needed to refocus his scouting in another area to accomplish our mission. 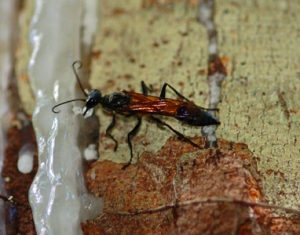 We had one more option to collect a good amount of resin that day. We walked back and past the station to the 9 hectare arboretum with a well-gridded system of trails. Crossing a flooded bridge, I was glad that a patch sewed onto a two-inch tear in my right rubber boot by a shoe-repair place in Iquitos seemed to be keeping my sock and foot dry. One Protium altsonii tree we called 13F125 in this area had been super valuable to our research since 2006. At different points, it had up to 20 different marked resin lumps. We had collected adult weevils from traps on its trunk and orchid bees collecting resin from fresh lumps. Our observations of wasps collecting resin dripping down the trunk from natural cracks in the bark were the first on record. 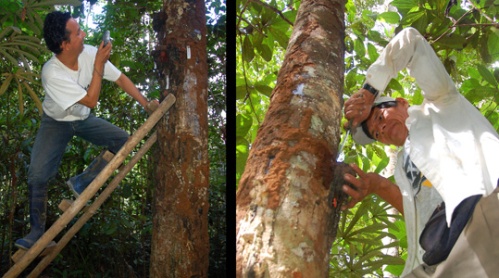 Unfortunately the tree was now dying. It had few leaves, and its trunk had thick brown lines of termites and pronounced patches of shelf-fungus. While any weevils inside its remaining resin lumps might last a while longer, it seemed unlikely they would survive to maturity so I decided to harvest the resin lumps for our trial distillation of this important species. Angel carefully photographed every lump first, Italo pried it loose with his knife, and I examined the bottom surface to examine the pattern of bore holes made by the weevil larva during its multi-year development. When the tree was cleared of lumps and resin seeps, I bid it thanks and farewell wondering if the weevils, our nails, or some other ailment had caused its demise. 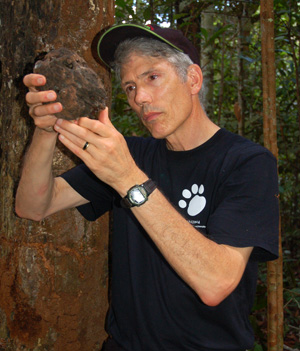 I wandered into the nursery back at the station, and was happy that its manager Leonardo was on hand to show me his progress creating a new generation of rosewood trees for our reforestation/essential oil project with Camino Verde at Brillo Nuevo. They only had a handful of small plants obtained some years ago from Tamshiyacu, but these had been enough to supply 300 scions (an inch long cutting of a branch stem with one intact leaf) that were now being nurtured in a planting bed. They were expecting a new supply from the same place that would provide the remaining 900 cuttings. Once the scions sprouted a good root, they would be transferred to an individual planting bag. If things proceeded as we hoped, they would be large enough by February, 2013 for Robin van Loon from Camino Verde to bring them to Brillo Nuevo and supervise their planting in up to four sunny plots. 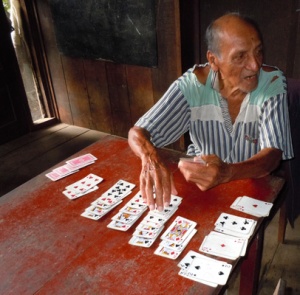 Angel and I got to Susanah’s house for a late lunch. Her russet-colored dog Peluchin greeted us with a friendly bark; her elderly husband Don José with a smile. Now retired for twenty years, he spent most of his time playing solitaire at the table where Susanah served meals to small groups of researchers staying at the station. 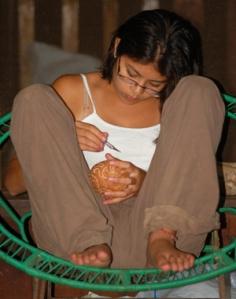 Marissa Plowden carving a coconut at Jenaro Herrera in 2006. Photo by C. Plowden/CACE

That evening I gave a presentation about our copal and craft work to twenty students from the agricultural university at La Molina in Lima. Every summer a group of the country’s top forestry students come to Jenaro Herrera to study tree identification, mensuration, forest and wildlife ecology. It was fun to explain the technical aspects of my work to a curious audience and extra challenge to field their questions posed in rapid-Lima brand Spanish. Angel and I later joined the classes’ three instructors for a prolonged night-cap in the same house I had lived in for a full month during the summers of 2006 and 2007 with my daughter Marissa. I could easily see her sitting in one of the low-slung rocking chairs made with green plastic chords tightly strung onto a rounded iron frame. 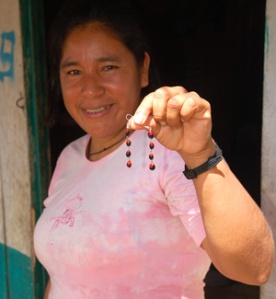 On my way to the port the next day, I stopped by the house of Neri and Edith, two women who had been leaders of an artisan group with the Catholic charity Kolping. After Edith was expelled, primarily for being gay, she and Neri started selling handicrafts from their house under the name of Artesanias Huicungo – named after a tear-shaped palm seed that made an attractive hanging earring. I wanted to check on the status of an order for over a hundred diverse pairs of earrings I had placed with them during my last visit to Jenaro in March. Making crafts, however, wasn’t going to generate enough income to support them. They both had regular day jobs and were now raising chickens in a back room. Neri had made about ten pairs for me, though, and promised that she would have the others ready by the time Angel came back to town in early August. 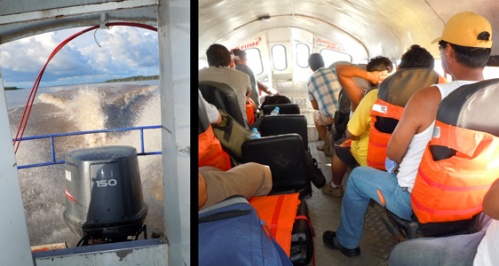 I needed to take the “rapido” from Jenaro back to Iquitos on Saturday since the next ferry that left on Sunday wouldn’t get me back to the city until the day after that when I was due to leave for Chino on the Tahuayo River. So instead of spending a leisurely 12 hours in a lancha, I had a jarring two hours in a 16 passenger motorboat followed by a harrowing two hours in a van with a driver who seemed hell-bent on breaking the land-speed record from Nauta to Iquitos – half of it in driving rain. One redeeming aspect of the express trip was the chance to swap stories with Emilio, a botanist from Lima who helped teach the tree identification part of the course for the La Molina students.