Now more then ever your purchases go further. Learn more about our Covid-19 relief efforts in the amazon. 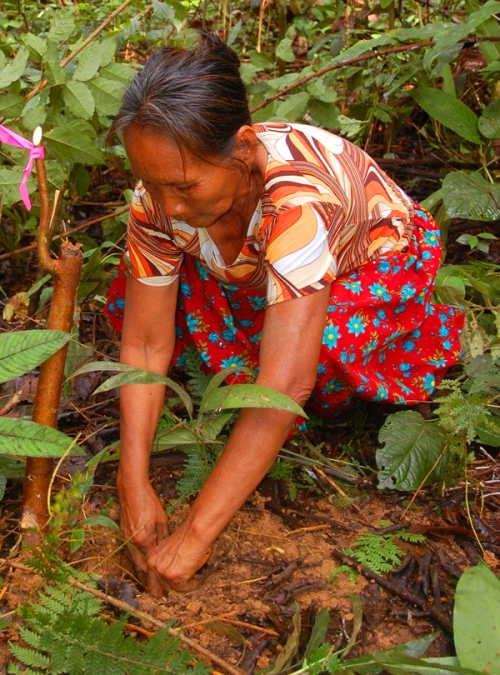 We have had growing success helping artisans in the Ampiyacu develop and market innovative handicrafts, but our efforts to catalyze significant reforestation of chambira palms used to make woven crafts has been frustratingly slow.  While we have also promised to reinvest part of our craft sales in the US to support health, education and conservation needs in the communities, this social rebate program had unfortunately created more dissension than good works for several years.

While mentally prepared to confront the same resistance, I decided to at least try a fresh approach while meeting with our artisan partners in Brillo Nuevo.  As they trickled in to our house at the far end of the village, they saw a written agenda posted on the wall.  Noting the ambitious list included numerous updates and serious topics, they favorably commented that it also included slots for receiving certificates, donated clothing, and lunch.

Since discussions of tough issues in previous meetings had sometimes produced more rancor than resolution, we also inserted a few cooperative games into the mix.  These were a balloon race which generated lots of laughs and an energetic round of caimans and frogs which featured artisans (as the frogs) holding on to each other on sheets of paper (representing tree stumps in a river) so the hungry caiman (the Amazon version of an alligator) wouldn’t get them when he woke up.

The results of the meeting included new agreements regarding craft pricing, quality control, a household survey, and a proposal for chambira reforestation.

Three days later, the full community endorsed the reforestation plan.  Brillo Nuevo would use a large chunk of its CACE social rebate fund to provide a standard “basket” of food (rice, beans, oil, etc.) for up to 20 families who wished to organize work parties (“mingas”) to help plant or do extensive maintenance on chambira, assai palm, or medical plants in their forest fields.  Future rounds would allow more families to do the same.  They also decided to use part of the fund to buy some critical supplies and medicines for the village health post that were not provided by the government.

When we headed back down the river to Puca Urquillo Huitoto, I was pleasantly surprised that their community meeting quickly agreed to also use their rebate fund to carry out 10 chambira work parties to replenish supplies of this vital plant for their artisans.  Another part of improving chambira management will be providing pruning saws that can be used to harvest leaf-spears without damaging adjoining stems as often happens when the task is done with a machete.

I was astounded when the leader of the Puca Urquillo Bora council handed me a 3 page proposal requesting our assistance to fund enrichment planting of chambira in 30 hectares of fallow forest fields.  Their decision was particularly surprising to me since they had rejected the offer of a researcher last year to measure the abundance of chambira palms in their fallow fields as we had done with artisans at Brillo Nuevo.

I have no illusions that these plans will be carried out without a hitch, but it was wonderful to feel this spiritual burst of affirmation to quench my growing wonder if some basic aspects of our work were seriously off-track.

CACE welcomes donations to this project through our page on GlobalGiving at: www.AmazonAlive.net

The student teams have given us a lot of valuable information and recommendations for ways to improve our website, work with influencers and social media, better frame our goals and achievements for the public and funders, and begin to understand the level of staffing and financial resources we will need to become a sustainable organization.  - Campbell Plowden, Executive Director, Amazon Ecology

GETTING STUFF DONE IN IQUITOS

GETTING STUFF DONE IN IQUITOS

While it can be very hard to get certain kinds of things done in Peru in an efficient way (like standing in line for hours to pay a bill at a bank), it’s a fun adventure to get other stuff done in a fun, timely and affordable way. I went out on Sunday to get some basic supplies for our house and got most of them at a modern store called Quispe, but right around the corner I found a fellow named Elmo who is the owner of one of the typical mobile micro-stalls (about 3 x 2 x 5 feet) that is his shop for his business to make copies of keys and help people with other kinds of locks. He first used one of those simple machine to make a rough cut of the key copy from the original. He then used a narrow grinder to fine-tune the copy.

I was really impressed that he used a hand caliper to measure the depth of each notch in the original key and the copy he was making. He eyeballed any minute differences because the calipers had no graduated lines on them. Elmo had been doing this work for 30 years so I felt pretty confident that his keys that cost me $1.25 each to make would work. He gave me his phone number to reach him just in case. His copies got me in my house just fine, but I’d like to see him again just to learn more about his life.

While the lease that we signed to rent our new house for CACE in Iquitos said everything was in good working order, we’ve discovered a few things that needed fixing to make the place more comfortable, safe and functional for our needs. As soon Tulio moved into the house, he met our neighbor Jorge who quickly became our go-to motorcar driver. When we mentioned to Jorge yesterday that we had a few plumbing issues that needed tending to, he said he had a friend who could handle them.

Julio showed up ten minutes later. They quickly determined that the threads in the faucet in the kitchen sink were stripped, the sink in my bathroom was leaking because the pipe under it was totally rusted through, and the sink in Tulio’s bathroom was clogged and just needed cleaning. After several trips to the hardware store to get various new pipes, glue, and tape, Julio donned my headlamp and used his and Jorge’s collection of old saws and wrenches to replace or clean all of the degraded items.

Julio returned this morning and spent the better part of the day doing four more tasks: 1) installing new pipes connecting our elevated water tank in the back patio to faucets in the work sinks so we could distill our rosewood material with an abundant supply of cooling water, 2) installed a new section of mosquito netting in my bedroom, 3) installed a new section of mosquito netting in the space above my bathroom, and 4) fixed up a wire in the back patio that was loosely connected by duct tape that was hanging out of a busted piece of PVC pipe.

We paid a total of about $25 in materials and $50 in labor for all seven jobs and everyone felt good about the tasks that were done. Julio looked around the house as he was leaving and said “please call me if you need anything done. I can fix your roof, put up a wall…….” Tulio told me tonight that Julio is someone who is referred to here as a “mil oficios” – someone who can do a thousand things. I know we have handymen in the US, too, but I’m awfully glad that I met Julio here.

STINGLESS BEES AT CHINO One of the houses I also visit first at Chino belongs to the veteran artisan Romelia and her husband Jorge. Jorge is one of the folks in the village who has maintained several wooden box nests with stingless bees as part of a honey producing project developed under the guidance of German Perilla from George Mason University in Virginia. While these bees don't produce as much honey as their stinging honeybee counterparts, their honey is highly valued for its strong flavor and medicinal properties.

During my last visit, Jorge's nest boxes were in his back yard. This time, he had placed both at opposite ends of his kitchen to keep a closer eye on them. I took several shots of bees coming and going out of the entrance tube as well as the guard which is always on duty to prevent the entrance of unwelcome visitors (other bees, flying ants, etc.) who might wish to invade to prey on their young.

Check out the video Beekeeping in the Amazon (https://www.youtube.com/watch?v=Ca2kYBJN4tI) focused on a stingless bee project developed with Maijuna native communities by OnePlanet.Org and its director (and CACE board member) Michael Gilmore.