Catching up with the Brillo Nuevo artisans

I’m often exhausted by the time I get to bed in the field, but I almost never sleep through the night. I’ve gotten used to just sleeping in my clothes inside a light-weight fleece zippered bag. I usually go to sleep with the bag wide open when it’s still warm and wake up long enough to close it when the Amazon night air turns very cold. The plague of my sleep are cramps in my feet so I alternate between curling up to stay warm and stretching out to work out these painful bouts of stiffness. I usually drape a full-fledged mosquito net around my hammock, but nice evening breezes have presented a minimum of the buzzing at dawn and dusk. This time I awoke for the third or fourth time around 5 am and just draped my mosquito net over my head in a way that kept the critters at bay and left enough ventilation for me to breathe. 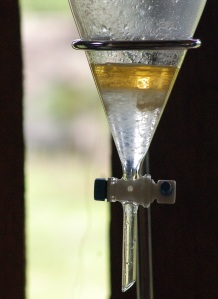 Yully and I arose early, brushed our teeth and headed off for the meeting at the other end of the village before our breakfast resigned to the fact that we were going to the only ones to arrive on time. We got a chance to pass by the houses of various copal and handicraft regulars who greeted us with assurances they would be along shortly. We made ourselves at home at the head table to plan our presentation until the President Renee and other officers arrived to take their place there. The room did begin to fill within an hour. Yully and I made our remarks and had a chance to answer some very logical questions – was CECAMA going to sell any oil we got from the copal and give 20% back to the community the same way we did with the handicrafts? I answered that it was premature to answer this before we had a definite marketable product, but I hoped that collecting, processing and selling any copal oil would be a community-wide enterprise.

We knew that there had been discontent about the way that the two local coordinators had allotted space on the copal teams for a diversity of men from the village. This has been a sort of classic conflict between trying to operate in a way that maximizes the efficiency of our project and chances for long-term success and political demands of the community that want to make any chances for people to earn some extra income (in this case participating in the copal surveys) equally available to all. We understand the latter principle, but the result of systematic rotation is that many people end up on teams who have very little ability to do what needs to be done, and people who learn the ropes and are recruited to stay are then resented by others who feel left out. We are trying to find a balance in this process that will allow us to keep a few of the most experienced people on the team while providing ongoing opportunities to discover and train highly motivated new people.

Now that we have funding for this project for a solid year, we have hoped that the community would re-elect our current local coordinator to this post, but since we won’t resume full-scale forest field work until August, this decision will be postponed. We were happy that the assembly at least seemed unanimous in renewing their approval of our project for another year. We left the room with a request for them to decide how they wished to allocate the $600 that had accumulated from earmarking 20% of CACE sales of handicrafts from Brillo Nuevo. 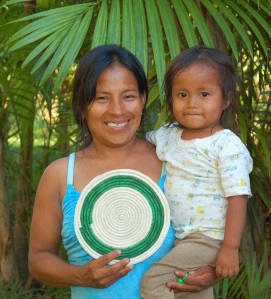 After some lunch and rest, we returned to the “locale” for our afternoon meeting with the artisans. In the first hour, women came up one at a time with the “tapetes” (woven chambira hot pads) they had made from our orders in the past month. It was encouraging to see that the number of artisans wanting to work with us has continued to grow even as some very experienced younger women have left the village for various reasons. Thus some models that had been expertly made by the original artisan had been turned over to others – sometimes with very good, sometimes somewhat disappointing results. 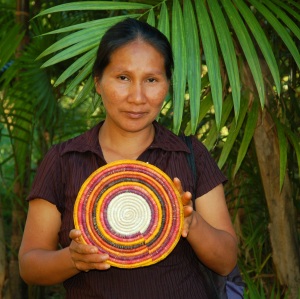 On the plus side, a few of the seasoned artisans had taken the initiative to make brand new and quite beautiful designs. While we are striving to create a set of standard models in each product line to reduce the need to keep photographing and describing every item to offer in our online inventory of products, it was obvious that keeping the door open to the creativity of this group is essential. We want to maintain a relationship that treats and respects these women as artisans – not as cogs in a production line.

We next introduced our idea for a new product line – handmade leashes and collars for dogs. People in American take such products for granted, but there isn’t a dog within a hundred miles of here that has ever been attached to such a device. People primarily have dogs for hunting – mostly chasing agoutis or finding the lairs of armadillos and to some extent for guarding a house. Most dogs weigh about 10 to 20 pounds (if they get more than an occasional bone to chew on) and are various shades of brown. Some of our friends were amazed to hear that dogs in our country range from tiny companions to specially bred and 100 pound-plus canines that retrieve ducks, pull sleds, lead blind people and find drugs. After describing the special requirements for making these long straps, about eight women volunteered to give it a try.

As we neared the end of the meeting, Dolores, a new member of the group raised a question that cut to the central challenge of this enterprise. She said that the tapetes just delivered could take as long as three days to prepare. They wanted to know if they could be paid more for these and other crafts. Our intent from the beginning has been to offer artisans new opportunities to sell crafts to help them support their families and take pressure off of primary forests. Our organizational and business model includes a commitment to pay a fair trade price to the artisans up front, return 20% of our sales to the communities that make the crafts, cover our costs for marketing and have some left over to help finance other aspects of the Center’s operating costs and programs. These criteria mean that we generally try to sell items we get for four to five times what we paid for them. This is not an unusual mark-up in the business world, but does it move us as a non-profit group beyond what can be considered fair trade?

I explained to the women that one other constraint we have on paying more than we currently do for crafts is that while we give regular feedback to the artisans about ways to improve the quality of their products, sometimes to the extent that some get very irritated, we still end up buying a fair number of crafts of less than optimal quality because we want to encourage up and coming artisans. This means we end up having to absorb the cost of buying for items that may never be sold. I encouraged them to consider how helping each other improve the quality of their crafts helps them all because producing items with more consistent quality will generate more business. They have recently had experienced dealing with another handicraft buyer who commissioned some women to make very complex pieces that took them over a week to complete. They were promised a very good price for these items, but the buyer rejected many pieces outright if it had the slightest flaw in it. Does this way of doing business create a greater incentive for artisans to improve their quality or untenable resentment of the whole process?

The other fairness aspect of this venture that is challenging to reconcile is the fact that crafts do not necessarily (in fact rarely) sell for prices that are proportional to the time invested in making them. My sense is that the potential profit margin on some special items such as guitar straps is higher than for other more basic items such as belts. It may take less time to make ten bracelets than one belt, but the total sales value of the bracelets could end up much higher. At some level, it might make sense to concentrate on selling a few items with the greater return to us and the artisans, but so far we haven’t tapped any veins that would allow us to sell hundreds instead of tens of items of any sort. Having a diversity of products has, therefore, helped us steadily increase our sales of crafts in the past four years. Hopefully the online store will open new possibilities for our partners and us.

Finishing our final consultation for the day, Yully and I changed into shorts, grabbed some shampoo, soap and towel, walked down to the river and carefully traversed a plank onto a somewhat rickety raft to bathe for the first time in several days. In contrast to Sunday night when the village was celebrating Father’s Day and allocated some oil for generators to keep lights on late until 10 pm, Monday night faded into dark calm shortly after sunset dominated by crickets, frogs, unknown bird trills and a full blown view of the Milky Way. I sat down to write, but instead decided to share some photos and videos from home. They enjoyed seeing Gary Gyekis perform one of his own rock tunes sporting an Amazon guitar strap as well as a video I made about my son Luke’s tennis team highlights this past spring.

For more information about the programs of the Center for Amazon Community Ecology, visit us on Facebook and our website www.amazonecology.org.