Wednesday morning Yully and I headed off with Beder again to one of his “purmas” to begin a survey of his chambira palm trees.  Chambira is by far the most important raw material that goes into the handicrafts made in this region.  While the tree readily grows on its own in young secondary forests, large –scale production of chambira baskets has depleted the stocks of chambira near several villages along the Tahuayo River.  They are now planting lots of new chambira, but we are hoping to stimulate a pro-active approach to chambira management and planting here before demand for new products overtakes the local capacity to make them with sustainably harvested plants.  The first step in this process is going to be a series of inventories of current stocks of chambira in the purmas of the artisans we work with as well as some survey of the density of these trees in the forest where it is also harvested. 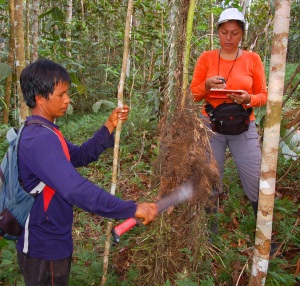 Beder led us to a “corner” of his purma where Yully recorded a GPS waypoint.  Beder used his machete to whack his way along the perimeter of his area while Yully stopped to record additional points where the border made a sharp turn.  After returning to the starting point, Yully drew a rough map of the boundary.  Trying to follow the methods used in similar studies, we decided to count all of the chambira trees inside a group of circular plots with a 10 meter radius.

While measuring the diameter of “regular” trees has some challenging fine points described above, wrapping a tape around a spiny multi-trunked palm tree like chambira would be pointless and painful.  We, therefore, prepared a 4 meter tall pole to estimate the height of the palms, counted the number of the mature leaves, cogollos (leaves that could possibly be harvested now or in the next few months) and stumps of stalks that had already been cut.

Beder explained that they only began cutting one cogollo from a chambira plant when it had reached a certain level of maturity.  After that a young stem had to be cut when it still looked like a spear since its fibers would become too dark and tough to make handicrafts if it was cut after its leaves began to unfurl.  We saw many trees with gashes in their healthy leaf stems made by harvesters whacking at a cogollo with a machete.

The Rainforest Conservation Fund has introduced pruning saws on long poles to some chambira harvesters on the Tahuayo River so they can better cut off a cogollo without damaging non-target stems.  Beder thought this would be a good tool to adopt at Brillo Nuevo as well.

Making our way around his purma, we found that the number of palms on one side varied from six to nineteen and then dropped to zero in several successive plots.  I asked if there was something different about this section that made it less hospitable for chambira.  Beder said no.  The reason there were so few chambira in that section was because he hadn’t planted any there.

Some eleven years ago, he and his wife Monica had spread around some 500 chambira seedlings transplanted from the forest.  Yully and I looked at each other with the same thought.  Why hadn’t Beder mentioned this detail to us at the beginning of the day?  The answer was straightforward.  We hadn’t thought to ask.

It seemed like a good time to break for lunch.  I had handful of farinha (toasted manioc flour) mixed with a third of a can of tuna with some water in a leaf bowl made on the spot by Beder. 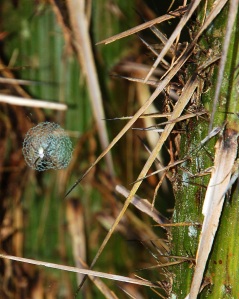 We walked around the border of the area that Beder and Monica had planted with chambira.  While we probably could have counted all of the surviving chambira plants inside it, it seemed like a better idea to keep using some kind of sampling procedure since Beder said that some other people had hundreds of mature chambira plants in their purmas.  We were too tired to use either procedure in Beder’s plot, but we considered it a good day for learning more about this plant and different ways that Bora manage it.  When we talk with the artisans on Saturday, we will at least know more of the right kinds of questions to ask to figure out a practical way to stimulate good management of this critical resource.  It wasn’t hard to see how more intensive marketing of crafts made from these plants could greatly enhance or vastly deplete its status.

Returning to the village, Yully and I pried off our boots, hung our dirty field clothes over round cross-beams in Marcelina’s house, borrowed a bowl and a bucket and headed to the river.  Our favorite bathing spot is a five by six foot raft tethered to a pole stuck in the muddy bank.  Yesterday we waited for one woman to gather her washing before venturing across the plank onto the unevenly balanced “balsa.”  When we appeared at the top of the hill today, one mom called out to three boys fishing with tiny stick poles to yield their platform to us.  Nothing is more refreshing than dumping buckets full of cool river water over my head after a sweaty day in the forest.

Back at the house, a few more ladies including the daughter of one of our veteran artisans, brought by “tapetes” (hot pads) they had finished.  I was content with a pack of crackers with jam and several cups of chicha morada (purple corn) flavored punch for dinner followed by some writing and early retirement to my hammock.  I had slept the first few nights without my mosquito net, but there were just enough of the buzzing critters in early morning to prompt me to slide this protective mesh over my hammock.  It definitely helped me sleep a bit better.

For more information the Center for Amazon Community Ecology, please visit us on Facebook and our homepage at www.amazonecology.org.

On Saturday, there were more people, good weather, great music and really good sales.  A woman from Chilly Brothers brought me some yummy jumbalaya as a thanks for the festive hats I had given the “mothers” of their restaurant, but it took me about five hours to finish my lunch since I had a line with up to five customers in it throughout the afternoon.

While I have formed some nice friendships with fellow vendors at many events, this festival is special because I have been welcomed as a sort of associate member of Painkiller Ridge - one of the longstanding groups of friends who set up camp together.  I didn't know exactly where they would be, but it didn't take long to find them at night because the large Peace sign light that adorned their main meeting area was an infallible beacon. It felt wonderful to be greeted like an old friend after a hiatus of 3 years during the pandemic.