Tuesday morning, Yully and I almost got to sit down to enjoy our morning fried eggs when the first artisan arrived at Marcelina’s house with her 10 foot long piece of wood to have us mark the template for the new woven dog leash and collars.  We had originally thought it would be easy if we laid out a set of two collars and one leash In a single band, but as the challenge of drawing a straight line against a bending tape measure on a rough board because almost comical, we changed gears and drew lines to mark the end points for the three pieces they would weave from one design all within the margins of the longest piece.

Each woman in turn was asked to make a narrow, medium or wide set of woven straps of a given design to begin our experiment in creating hand-made pet supply products – “walk your dog and save the amazon.”  We asked everyone to bring by a short piece for us to look at so they don’t invest too much time making a strap that doesn’t fit the hardware of the buckles and snaps.  I will have to remember that the first batch of every new product we’ve done looked very rough.  The second generation showed great improvement and the third even more after that.

I ventured into the forest mid-morning with Yully, our (perhaps lame-duck) local coordinator Beder and veteran craft maker and woodsman Don Lucio.  Our mission on this forest outing was to conduct the first round of monitoring the status of copal trees and resin lumps that had been marked and harvested almost a year ago.  We didn’t need to walk far to get to a mature “purma” (patch of secondary forest growing back after use as a farm plot) of Manuel.  Most of the copal trees there had been planted some 25 to 30 years ago and had grown to a variety of sizes in the tangle of all the other trees that had naturally regenerated since then.  Our best guess is that these were a variety of the genus Dacryodes.

We walked from tree to tree measuring the diameter to see how much they had grown in a year.  This is a deceptively simple task, but deciding where to wrap the tape around the trunk at the standard 1.3 meters above the ground presents various challenges.   Buttress roots can make a tree seem huge at the base even though its tapers upward to pole size; one side of the base of a tree is often higher than another; trunks can split and veer off sideways; knobby structures can emerge right where one wants to put the tape.  There are many forestry rules to govern these irregularities, but it takes a good amount of training to apply these consistently.

Our main task, however, was to observe the number and condition of resin lumps on these trees.  The unfortunate reality was that there weren’t many of these to begin with on these trees last year, and this situation hadn’t changed.  Early in the process, Don Lucio spotted a small hard nodule of resin on one tree.  Removing it we noted that there was a small hole in the center of this tiny lump as well as in the tree.  We presumed that a weevil larva had begun feeding in this spot, but it hadn’t progressed very far.  I noticed other signs that these trees weren’t cooperative hosts.  In some places, I noted fissures in the bark overlying a mound of wood.  While these weevils have adapted remarkably well to copal trees’ front line of resin defense, some trees literally push back against a larva feeding in its inner bark by surrounding it with an extra hard layer of wood.

We did find several trees, though, where weevils had become well established.  A few almost perfect hemispherical lumps that were half the size of a baseball had a circular hole in their crust – a sure sign that a weevil had completed its development and emerged as an adult.  Other lumps had fresh white resin on their periphery indicating they still had a live larva growing inside.  Since a few of these were on lower parts of the tree near a main trail, we didn’t give them much chance of surviving to maturity.  Passersby routinely whack trail side trees with their machete, and exposed lumps are an attractive target for curious kids and adults wanting a bit of resin. 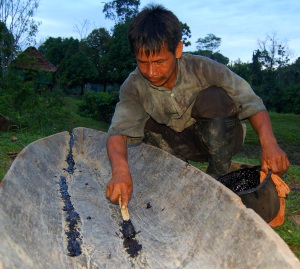 While the Bora use the resin lumps that appear on these trees to caulk their canoes, their main purpose for planting this kind of copal tree in their farm fields before letting them go fallow is to produce a small edible fruit that is a favorite snack food.  More precisely they chew the slightly sweet and oily pulp that surrounds the seed.  While Yully has spent more than a year dealing with copal resin and appreciates it aroma, she said she wasn’t so fond of this taste in the fruit.  When Beder clarified that they didn’t eat the seed because it indeed was resinous, it immediately generated the idea to try distilling some of these seeds to see if we could extract a nice essential oil from it.  Don Lucio said that Ena Chichaco, one of our main Brillo Nuevo artisans, actually had a large bag of these seeds she had saved after sucking off the pulp.

Returning to the village, we were beckoned by another artisan Amalia to come into her house to talk.  Last year Amalia had said she would like to make some belts with traditional Bora designs instead of the snake models we were developing with the other artisans.  I said we’d certainly be glad to have some of these since I hoped our project would be one means to fortify traditional Bora culture, and we agreed on a few basic geometric patterns that she would work from.

Earlier this year, I thought it would be good to add a logo to the snake head on the guitar straps they were making as a way of branding it as a special product made by this community.  I suggested one of these patterns, and asked Yully to consult with the artisans about it use.  They agreed and wove this design into the next batch of straps they made.  Amalia kept quiet at the time, but now given the opportunity to meet with me, she said that seeing “her” design on the guitar straps had reduced her enthusiasm for finishing a belt that she had begun with it.  She and Yully got into a lively debate about what had or had not been said during the community discussions about this topic.

The topic certainly raised many questions for me.  It is clearly proper for any outsider to ask formal permission to use any cultural icons of a native group.  What is much less clear is who has the right to give such permission.  In the case of this symbol, does the right to use it or authorize others to do so rest with one artisan, one group of artisans, one community, or all extant Bora communities?  These symbols are far from secret since they have been widely adapted to a variety of commercial products available in Iquitos and elsewhere.  We will discuss this matter later this week and see where it takes us.  We are certainly prepared to withdraw its use on the guitar straps if its makers wish us to do so.

For more information about the programs of the Center for Amazon Community Ecology, visit us on Facebook at our website at www.amazonecology.org.