Reunions in Iquitos and challenges ahead

I appreciated that many things were the same in Iquitos and had to accept that others had changed since my last visit in the summer of 2011. I welcomed a ride from the airport to the city with a van from the Hotel Marañon. The driver I knew had been replaced by Lucho – a native of Loreto who had spent decades as a truck driver elsewhere but had come home to treat his diabetes with a local plant he knew well. I then got to meet a new receptionist at the hotel because the woman I had known well (even if she seemed overly serious much of the time) had been transferred to the newer (and more expensive) Hotel Gran Marañon built by the same owner. After a long two days of travel I was disappointed to have a room tucked away in the back of the fourth floor, the internet signal was too weak and the hot water came out in a dribble. I put aside my pride, though, and ventured out to the street.

I first needed to change some money and headed up to a corner past the Plaza de Armas that usually has a line of “cambiastas.” Most were gone by 10 pm, though, but I gave one pair of men a try. They looked suspiciously familiar, though, and my memory of them was confirmed when they rejected two bills as imperfect and tried to short-change me with the soles they offered for another. I withdrew knowing it would be better to deal with the reputable “Chino” in the morning. My next destination was the Boulevard – one block overlooking the river that is packed with touristy restaurants and bars, street entertainers with a line of shacks on a side street selling handicrafts. I looked for Damaris Panaifo who had made some very nice earrings for me last summer, but her and most other stalls were shuttered for the night. I did meet the engaging grey-haired artisan Luisa Paredes. She was raised in San Martin near Lima but has been living and selling her crafts in Iquitos for 19 years. I bought a small assortment of paiche scale earrings and achira seed bracelets.

The next familiar face I encountered was Devon Graham sitting with two fellows outside his favorite haunt El Meson. He is a teacher at a university in Florida and director of Margarita Tours that organizes creative eco-tourism trips in the area. Devon has allowed us to put a selection of our crafts on their boat to sell to their upscale clients. His operation also supports a partner NGO called Project Amazonas. This group attracts doctors to spend several weeks offering free medical care to many communities downriver including the villages we work in on the Ampiyacu.

I told Devon about my visit To MINAG in Lima and the lengthy new requirements for doing DNA studies. He urged me to contact a biology student at UNAP who had been collecting and studying the DNA of some butterflies at a lab on campus. I didn’t know that any local institution had this technical capacity, so it will be well worth exploring this option.

Wandering off in search of food, I was temporarily very upset when I thought that my favorite hangout, the Karma Cafe had been replaced by a techo bar with flashing blue neon lights. My need to absorb this change, though, was blessedly short-lived when I realized one block later that my navigational memory was once again less precise than my emotional faculties. My “Cheers” of Iquitos was right where it had been. I was greeted by the manager Antonio and set up my computer to catch up on email, edit some photos, and enjoy a papaya smoothie and warm sandwich. I’m not part of the usual clientele that often includes people en route to ayahuasca healing sessions, but I enjoy the living room atmosphere of the place. The British owner Stacy returned for the closing shift around 11 pm, and he caught me up on some of his affairs. He’s very comfortable in Iquitos although he does miss the beer and a few other special foods from home. I proposed a game of chess at midnight but he declined due to the late hour, and encouraged me to come back when he was around earlier in the evening. It was good discipline for me as well to retire to my hotel and get some sleep.

Yesterday morning I unpacked my big duffels and sorted contents into piles of vials and research supplies for Angel, outfits for his new infant son, highly coveted duct tape and tags for Yully’s work in the Ampiyacu, and a big bag of clothes that Luke had outgrown for Italo’s (our copal project field assistant) family in Jenaro Herrera. Yully and angel both arrived at the hotel for our morning powwow around 9 am. Angel was very happy with the gifts for Yamil, and admitted that he was still getting used to the extra work and less sleep that accompanies caring for a newborn. His wife Yolanda had to go back to her job as a nurse after one month so Angel needs to help with feedings more often. 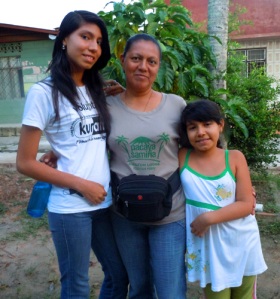 Yully shared some of the sad story about her recent trip downriver to help recover the body of a friend’s daughter who died in a ferry accident – unfortunately far more common here than one would wish. Yully had heard another piece of news that was noteworthy for our work was the apparent collapse of the export of chambira baskets made by several villages along the Tahuayo River including our partner community Chino. They had been selling as many as 800 baskets every three to four months to a broker in the U.S. She didn’t know the cause of this change, but it must have caused a profound decline in the livelihoods of these villages. Anticipating a continual growth in this market, this project’s sponsor PROCREL had taught artisans in two Maijuna villages how to make these baskets last year, but the enterprise was aborted before it even got off the ground. We will need to confirm this from people at PROCREL and in the communities to find out what happened with this situation and learn whatever we can from it. When things were going well, training multiple artisans to make 20 standard models of one product seemed to make sense. It now seems that the core risk of this approach was putting all of its baskets into one basket. CACE does not yet sell a large number of any one type of craft. Our strategy has been to work with our partners to create a diverse array of products to satisfy many tastes and market niches.

Yully told me that I will need to address another concern right away. Artisans in several communities reacted strongly to the news that we sell crafts in the U.S. for three to five times what we pay them. My job will be to explain our reasons for returning 20% of our sales to their communities as well as other aspects of our business model and reality. Unlike many buyers who take craft on consignment, pay the artisans for the crafts they sell months later and return the ones they don’t sell, we pay the artisans up front for all crafts we receive from them and assume the risk of not selling them. Analyzing our craft sales, I found that we have sold about 42% of the items bought at Brillo Nuevo. We will hopefully eventually sell many of those in stock, but I accept that we will never sell many items made by artisans who are learning to make a new product and some of our experimental products just don’t work. We can get full retail price when we sell to people directly but selling to stores at wholesale prices or on consignment reduces what we get by 20 to 40%. We are still in the early stages of figuring out how to manage all of these affairs. Developing a business as a non-profit with non-business motives is not easy. I am committed to being totally open with our partners and reach an agreement about pricing that feels fair to them and is viable for us. If we can’t operate this way, there’s no point doing what we’re trying to do.

On Saturday, there were more people, good weather, great music and really good sales.  A woman from Chilly Brothers brought me some yummy jumbalaya as a thanks for the festive hats I had given the “mothers” of their restaurant, but it took me about five hours to finish my lunch since I had a line with up to five customers in it throughout the afternoon.

While I have formed some nice friendships with fellow vendors at many events, this festival is special because I have been welcomed as a sort of associate member of Painkiller Ridge - one of the longstanding groups of friends who set up camp together.  I didn't know exactly where they would be, but it didn't take long to find them at night because the large Peace sign light that adorned their main meeting area was an infallible beacon. It felt wonderful to be greeted like an old friend after a hiatus of 3 years during the pandemic.