Our task for Wednesday was to extract as much oil from the leaves from the palo de rosa (rosewood), copal and canela moena we had collected the day before. In all of our previous distillations, we had used a two-burner stove connected to bottled gas to boil the water. Since these tanks are becoming increasingly expensive, unwieldy and hard to legally transport on boats we decided to do our trials at Brillo Nuevo with a fire. We’d ideally need a place that already had a cooking area and easy access to water for heating and cooling. I checked out the house next to Marcelina’s that we had used distilling copal resin there in 2009, but the floor boards of the abandoned structure were too rotten to move around it safely. The kitchen area of the school where we had met with the artisans the night before seemed perfect, but we couldn’t put our gear in the area if parent volunteers were preparing breakfast for the children before their classes. Fortunately for us, less so for the kids, the school director said we were welcome to use the area because the local government hadn’t provided any food for this program in over a month.

While Yully, Oscar and I set up the distillation apparatus, our younger helpers from yesterday gathered and split firewood. After perching the copper alembique pot on three corners of ceramic bricks with other pipes and tubes leading down from its onion-shaped dome to the condensing coil, we realized we had made a major miscalculation. The packed earth cooking area was not nearly as high as the table that Yully has used in the past. With its initial position, the pear-shaped flask that would separate the oil from the distillate water would be on the ground – not an ideal location for a glass item. Our native engineers set themselves to the task and within ten minutes they came back with two matched stumps and an iron grill that provided a tall and stable base for the 20 liter pot.

We next prepared the palo de rosa leaves for distillation. Teobaldo tore off leaves, Yully snipped little branches into small pieces with pruning shears, while Oscar and Dennis chopped medium-sized ones with their machetes. By the time we had two kilograms of leaves in the pot, it seemed almost full so we switched to adding carefully measured batches of water and then topped off the pot with another kilo of leaves.

We next fitted the column and dome on top of the pot and sealed all the junctures with a caulking material called Moldi-Mix. As Oscar massaged the yellow and blue sections of thin pieces together to activate it, he was surprised how much it heated up and almost burned his fingers.

Teobaldo put a handful of firewood under the pot and within minutes, we saw the temperature gauge rising. For a moment we marveled that the fire was heating the water so much faster than the gas stove until we realized that it was a flame on the outside of the pot not the water within that was heating it. By the time we discovered our mistake, the plastic cover on the gauge had melted. We pried off the warped cover, and were relieved to find that the thermometer needle was not damaged. The guys scrounged up a few pieces of “calamina” (corruguated aluminum usually used for roofs) and placed them around the pot to focus the fire inward and shield other pieces from the heat.

About 45 minutes after the fire started again, an amber-colored oil starting dripping into the separatory flask. We measured the weight of oil that came out every half-hour until the process completely ran its course in four hours. The amount was less than we had hoped for, but it had an exquisite aroma. It was not hard to see why this has been a classic scent for millennia.

We didn’t want to start another distillation that could last well into the night so we prepared the leaves from the canela moena to get an early start the next day. The only challenge of this task was dealing with hundreds of irritating ants that had been living in these branches before we brought them down.

I usually took my afternoon bath by a barrel that collected rainwater from the roof of the school. I got a treat today by pouring bowls of warm water over my head from the large basin that collected the heated water coming out of the distilling condenser pot.

My relaxed mood was short-lived.

During dinner, Ines told Yully and me about the better prices that they were now receiving for hammocks and some bags sold through IIAP to a fair and perhaps export market in the U.S. She then almost casually said that she and her three sisters had decided they were going to stop making crafts for CECAMA when Oscar finished his term as local coordinator with us in August. They all liked working with us, but they were tired about receiving so many hurtful comments from others that seemed motivated by jealousy about their frequent craft sales to us and preferential consideration of their family in general. The fact that three of them had received artisan prizes two nights before only seemed to aggravate these feelings.

I was shocked and saddened to hear about the pain that this woman who had such an easy laugh had experienced. I was also worried that if she and her sisters stopped making crafts for us, it would gut the core of our artisan group and ability to keep making many of the most popular models.

I absorbed this news in silence for almost half an hour and then began to explore options. Ines suggested that she could keep making crafts for us if we handled the orders privately. I then described the Alternatives to Violence Project workshops I did in prisons and other places and how these can help people learn how to communicate better and build a sense of community. She thought the artisans might welcome a chance to do something like that. This seemed like a nice idea to consider for the future, but we needed some shorter term approach to deal with this situation. 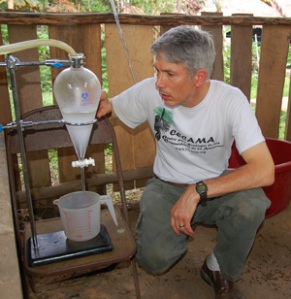 We began the second round of distillation at dawn the next morning with the canela moena leaves. While there was a distinctive pleasant aroma wafting from the top of the separatory flask, there was no measurable amount of oil collecting inside. We discontinued the distillation after an hour wondering the young leaves used in this trial was responsible for the low oil yield. After the pot cooled down, we cleaned out the spent moena leaves and reloaded it with ones from copal. The result of this day’s second batch was equally disappointing. We aren’t giving up, though. There are many other species to test, and oil content can vary with the age and location of leaves and method of distillation. 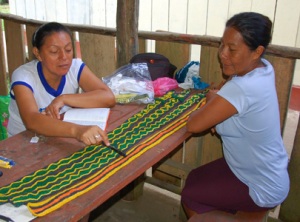 While the copal leaves were simmering, Angelina came by to drop off a few guitar straps she had finished making. I took the opportunity to ask her if we could talk. We walked back to her house and sat on simple benches in her front room. I told her how sad I was when the artisans were silent during the award evening and lamented the lack of harmony in the group. While she felt like this schism may have been caused by prideful behavior of some artisans, she said she very much wanted to help the group become more unified. For her part, she felt like we were dealing with the artisans without favoritism and thought that continuing the prizes was a good thing. Our regular feedback on her work had significantly helped her improve the quality of her crafts, and she thought that the multiple-level certificates and prizes would provide additional positive motivation for others. She invited me to attend a meeting of the artisans the next morning to speak my piece.